If you look at the bike racks at an average railway station in the Netherlands, you will see that Gazelle’s bicycles are in the majority. There is a simple explanation for that: the brand from Dieren arrived on the scene early, back in 1892, and immediately laid a rock-solid foundation. As a result, the company is still at the forefront of the market today. The founders, Willem Kölling and Rudolf Arentsen, not only introduced bicycles to the market, but also immediately realized the potential societal impact of their products. “You can cover greater distances quickly and efficiently. This gives people a sense of freedom, because they can go wherever and whenever they want. With their strong entrepreneurial spirit, the founders started producing the bicycles themselves,” says Mirjam van Coillie, director of marketing and innovation at Gazelle.

Gazelle’s reasons for making bicycles accessible to the general public were not only commercial ones, but above all motivated by a belief in the power of the product. Van Coillie calls it the ‘First Bicycle Revolution’. In the early 20th century, for example, Gazelle made bicycles more suitable for women. “The first important step in the bicycle’s evolution was equal wheel sizes. After that, the ‘priest’s bicycle’ model was introduced with a low step-through frame. It made things easier for priests wearing long robes, but women embraced this model too because skirts no longer got in the way of cycling. Despite only having a single downtube, the frame was sturdy enough. The low step-through frame was groundbreaking from an engineering perspective. Gazelle started to produce large volumes of these bikes.”

Gazelle paved the way for cyclists in several other ways. Safety was an important core value for the product developers right from the start so that people had no reason to be afraid of cycling. In addition, Gazelle played an important role in gaining acceptance. Perhaps one of the most appealing examples of this was the introduction of the cartoon character called ‘Piet Pelle’ in the early 20th century.

“Gazelle’s role in society is to stimulate the use of bicycles, and that’s also what we aimed to achieve back then with the Piet Pelle comic books for children. A love of cycling starts at an early age,” continues Van Coillie. “We were one of the founding fathers of the success of cycling in the Netherlands and are a cultural pioneer.”

At first glance, there appear to be few differences between the very first bikes and those of today. However, one very important innovation has been added to the latest generation of bikes: pedal assist. According to Van Coillie, the electrification of bicycles has heralded the ‘Second Bicycle Revolution’. Gazelle was one of the first to integrate the technology as soon as it became mature enough for use in the development of e-bikes. Nowadays there is a wide choice of e-bikes, ranging from city bikes and touring bikes to cargo bikes and commuter bikes for travelling to and from work. With large production volumes and lots of innovations, Gazelle is a leader in the electric segment.

In the midst of the mobility transition

“We’re in the midst of a mobility transition,” states Van Coillie. “The dominance of cars is declining, while the bicycle is gaining a more significant and important role. It is all because the e-bike offers a solution for various societal challenges. Increased use of bikes is good for the climate, the air quality and the traffic flow. Moreover, cycling makes people fitter and more relaxed. And the connectivity of e-bikes certainly opens up a lot of possibilities. For a 15-kilometre trip, the argument for taking the car rather than the bike has now been weakened: hills are no problem, there is theft prevention, you don’t arrive at work all sweaty, you can plan the route, there’s more comfort. The electric bike has become a fully-fledged transport solution.”

How did Gazelle get its name?

Gazelle wasn’t called Gazelle right from the start. Instead, it started out as the company Kölling and Arentsen, named after the two founders Willem Kölling and Rudolf Arentsen. In 1902, the two gentlemen purchased a building on Wilhelminaweg in Dieren – where Gazelle is still based today – and their business rapidly expanded.

While out walking in the woods one day in the summer of that year, Willem Kölling spotted a deer bounding across the road between Dieren and Laag Soeren, and was impressed by the animal’s speed and grace. The Gazelle brand name was born!

Focus on the usage 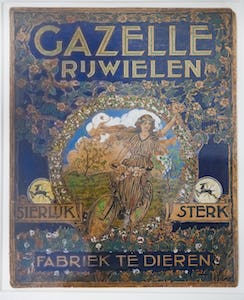 Gazelle is participating in the ‘Second Bicycle Revolution’ with reliable and safe bikes that are more aligned with cyclists’ needs than ever before.

“The specifications of a bike now truly meet the needs of consumers. Today, we focus on usage scenarios. Our product managers involve end users as early on as the development phase. And bike retailers are an indispensable extension of our research activities for the same reason; they are in daily contact with consumers and know exactly what they want. By working together, with an open network structure and access to data, we can serve consumers even better.”

Experimenting with e-bikes since the 1930s

What many people don’t realise is that Gazelle has actually been experimenting with e-bikes since the 1930s. Together with Philips and other manufacturers, Gazelle first tested an electric bicycle in 1932. The test ultimately failed, because the quality of the system was inferior in every way to the motorised bicycles powered by a combustion engine that were available at that time. This ‘first e-bike’ could not compete on price either. Nevertheless, many decades later, Gazelle is a leader in the field of electric bikes.

Gazelle makes its mark on the bicycle sector in the 1930s

Gazelle struggled initially in the period after the First World War. Good employees were scarce, but the situation soon changed. The company found a large market in the Dutch East Indies and launched a series of innovations that were well received. In 1935, for example, it introduced the first tandem and that was an instant success. In the same decade, Gazelle made an even bigger mark on the bicycle market with the invention of the drum brake, which it also supplied to other bicycle manufacturers. The introduction of the innovative cross frame also contributed to rapid growth in that period.

Piet Pelle on his Gazelle 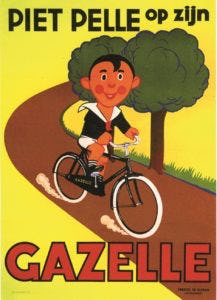 Producing good bikes is one thing, but marketing and selling them successfully is equally important – if not more so. In the early 20th century, Gazelle increasingly managed to position itself internationally alongside tulips, cheese and clogs; its bicycles were seen as typically Dutch. Domestically, an important marketing instrument was the introduction of a comic book ‘for children aged 8 to 80’ featuring a boy called Piet Pelle (on his Gazelle) in the leading role. Gazelle dealers handed out the comic books as promotional material when selling children’s bikes. In the 1930s, Theo Güsten produced a six-minute cartoon in which Piet Pelle travelled to the North Pole by bike and airship to install a radio.

Although Gazelle has been internationally active since the 1930s, the export activities have only been given more priority relatively recently, thanks mainly to the ‘Second Bicycle Revolution’.

“Whereas cycling used to be seen only as a sporting pastime in many countries, today the bicycle is also a mobility solution in places where traffic congestion and air pollution are commonplace. Thanks to the arrival of the comfortable e-bike, cycling now appeals to more and more people around the world,” says Van Coillie. “Gazelle already has a strong foothold in Germany, and we’re making good progress in the United States, among other countries. Our longer-term goal is for 50% of the Gazelle bikes we produce to be destined for export.”

This article was sponsored by Gazelle.