Global bike tourist Alee Denham has ridden bikes with chains and Gates belts through some of the planet’s harshest conditions and, for him, the most efficient choice is obvious. “I have been riding belt drive bikes across continents since 2010, and after more than 100,000 kilometers across 100 countries, I’m ready to tell you there is no better touring, bikepacking, or commuting drivetrain available,” Denham says in his video, “The Best Bicycle Drivetrain Available.”

What is more effecient, belt or chain?

Denham’s opinion is shared by the growing number of consumers and manufacturers who are choosing Gates belts due to their clean, strong, and convenient advantages. But there is a small segment of the bike community that wants to debate the question: what is more efficient, belt or chain?

The scientifically accurate answer: it depends how you measure and define efficiency. Do you measure efficiency like a bike racer whose only concern is the number of watts they transmit through their drivetrain? Or is the efficiency of a used system not much more interesting for the average cyclist? Plus the amount of time saved and maintenance avoided? 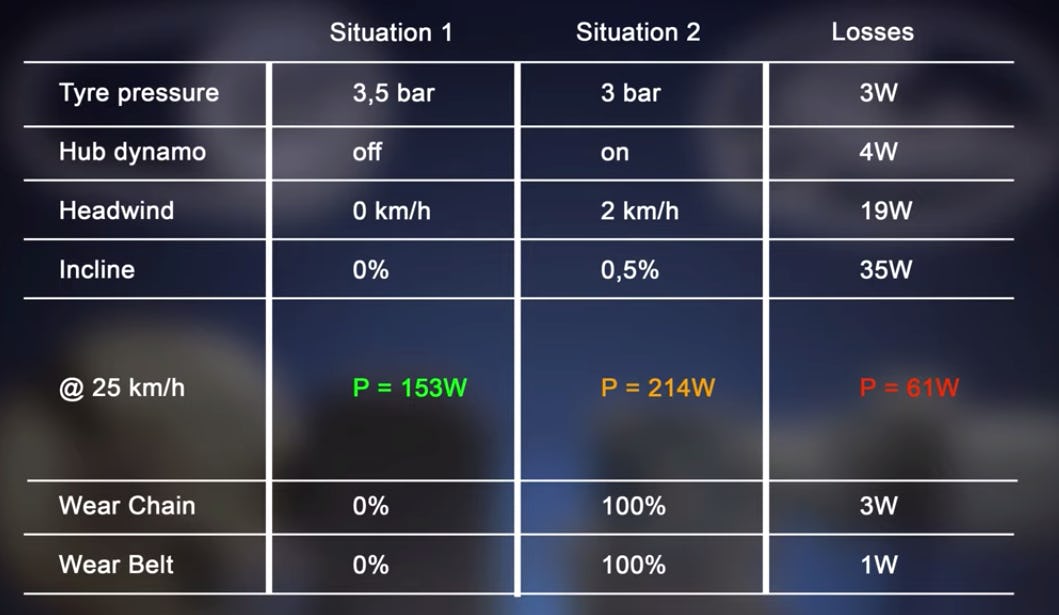 The fact is, Gates did not create its bicycle drive primarily to win races, although we have won many. The genesis of Gates Carbon Drive was the desire to help more bicyclists simplify their lives, to enable people to get out of cars and onto bicycles to create a more efficient society. Research shows that bicycle maintenance is a barrier to increased bicycling. Gates created Carbon Drive to be an efficient overall solution. 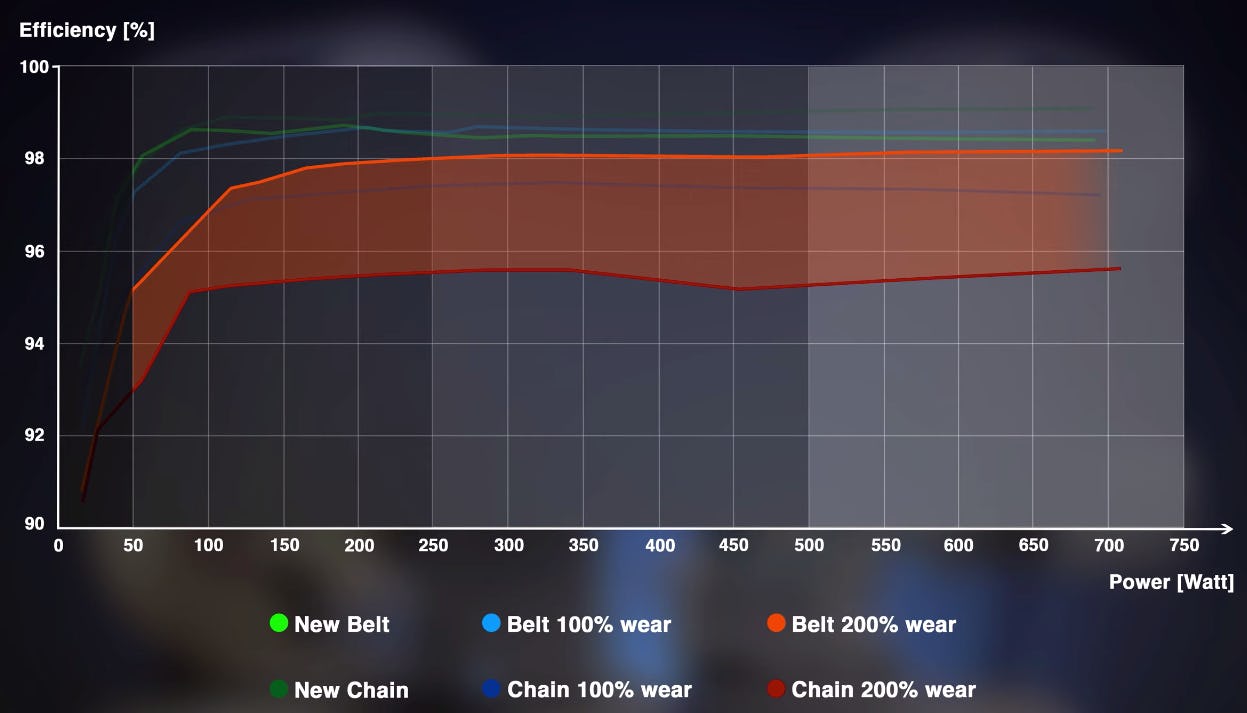 But the efficiency question persists. Perhaps you have seen videos of bike nerds stacking weights on pedals to measure drivetrain efficiency. These tests are misleading and unscientific. Unfortunately, misinformation spreads, so Gates decided to answer the question by working with its European distributor, Universal Transmissions, to design a laboratory test that measures the percentage of watts that a belt and a chain transmit to the wheel, and how much is lost to friction. The tests measure friction losses in a variety of conditions that mimic real-world scenarios.

Differences in watts are minuscule

The results, documented in this three-part video series, show that the differences, measured in watts, are miniscule. The difference between a new chain and a new belt is about 0,5%. When both drivetrains are used and worn, however, the belt quickly becomes more efficient. A worn chain drive is about 4% less efficient than a worn belt drive. Testing shows that Gates Carbon Drive belts are the clear winner when you measure the efficiency of a worn belt to a worn chain. Gates belts keep their efficiency over time, while chains continually lose efficiency. This is because chains stretch. Gates belts do not. Chains have weak links that rust, trap debris, and must be oiled. Gates Carbon Drive runs clean and sheds debris. We urge all bike dealers, mechanics, and product managers to watch the videos.

Bikes using the Gates Carbon Drive product can be designed for maximum pedalling performance. In addition bicycles are designed for comfort, safety, durability, and many other factors. Most bicyclists are riding to work, to the pub, to school. They are touring the countryside. Fun, health, fitness, and the joy of riding are their goals, not a benefit of 0,5% of efficiency on a brand new product. 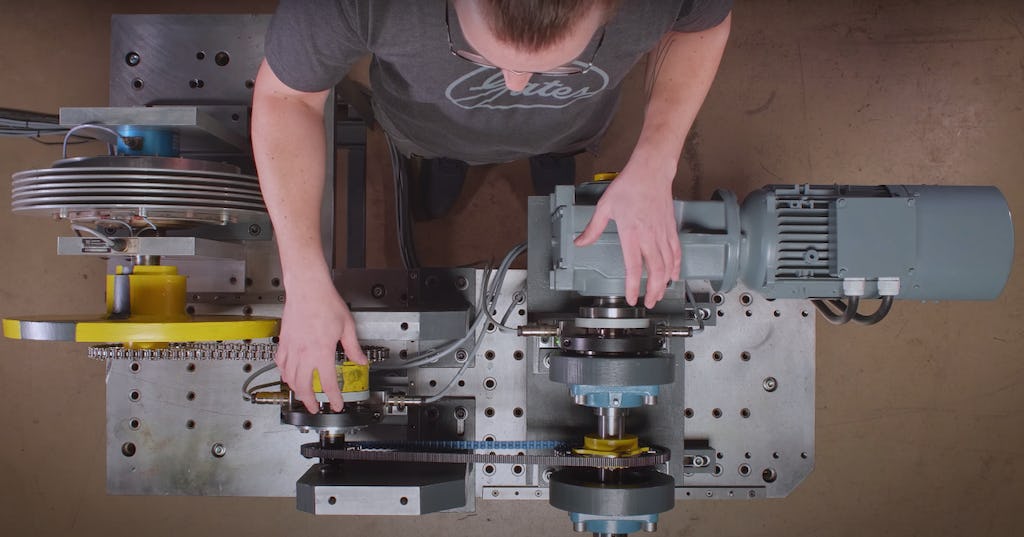 It is on electric bikes that the Gates Carbon Drive system really shows its efficiency advantages—especially on high-torque models that rapidly degrade chain drives. The Gates Carbon Drive belt handles the higher torque of e-bikes over a longer timeframe. The Gates drive stays efficient even under high loads and high miles because it does not stretch like a chain. This means the battery will last longer, and the customer will have more fun on their belt drive e-bike — even after many years of usage. Cleaning and oiling a chain to maintain maximum power output requires work. Extra work is inefficient. The most inefficient bicycle is the bicycle not ridden.

Gates Corporation is an engineering leader with a legacy of creating long-lasting, superior-performing power transmission belt drive products. From driving blowers on 10,000 horsepower racing engines to working with industry leaders from motorcycles to manufacturing, Gates has been offering its drivetrain expertise to the automotive, industrial, and engine powered world since 1911.

This is article is sponsored by Gates Corporation