“Electric bikes are indicative of turnover figures. Not only in the Netherlands, but also abroad. Those who look at the current production of e-bikes and compare them with the production of one year or ten years ago, will immediately see the differences and developments that have occurred. A clear change is the movement towards ever wider rims and tyres. It’s more enjoyable and comfortable. Of course, such a change requires adaptation in the industry,” says Jim Smits of Holland Mechanics.

For decades Holland Mechanics has been the leading manufacturer of wheel construction machines, and for a long time the company has also been making machines for the production of e-bike wheels. The company has made sure that wider rims are now easy to handle as well. Rim widths of 40, 60 and even 100 millimetres are no problem. At high speed and within minutes, the wheels are always produced with the same quality. 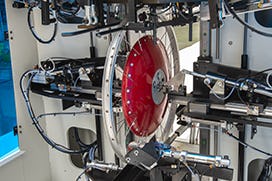 “The wheel construction machines serve as good examples of Industry 4.0. Separate stations are in place so that the production process runs fast and smoothly, with increased efficiency. Robot-DTI is a prime example of this. This machine can take out tension. This is a massage technique that causes the spokes in the production process to be better placed in the wheel and tension is removed. Our wheel construction machines offer solutions for e-bikes with both mid and hub motors. ”

Automatically and without help

Wheel manufacturers that now work with the Holland Mechanics machines have various advantages.

“The most important thing is that the wheels are of a reliable, constant quality. In order to achieve this, there are as few people as possible handling it. Staff is only needed for lacing and tyre mounting. The rest happens entirely automatically,” says Smits of Holland Mechanics.

The wheel construction machines fit into yet another development in the two-wheeler industry: The production shift from Asia to Eastern Europe, among other things.

“Wages in Asia are rising, making it less attractive to produce there. The wheel construction machines are virtually unmanned, so there’s no reliance on staff. They fit the trend to produce closer to home, because they are machines that fit in well with the ‘just-in-time’ concept. The rim type settings of the machines are easy and quick to adjust, so rotating small volumes of a rim is possible. It is possible to produce just enough and without any surplus.”

This article was sponsored by Holland Mechanics.